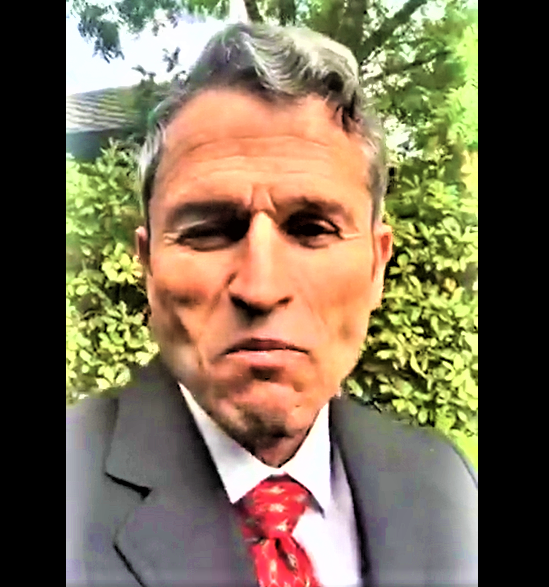 AUSTIN POWERS BENNETT
Austin Powers Bennett is a crisis actor.  He plays the role of a Republican candidate running for California Senate — against the notorious Senator Richard Pan, architect of SB277!  What is the role of Bennett’s character?  SPOILER ALERT:  Bennett’s character is gonna lose the Senate race – on purpose — to ensure Sen. Pan’s re-election!  That’s right!  Bennett is gonna throw the match — just like a prize fighter purposely falling to the canvas in a rigged boxing match!  #boughtAF! 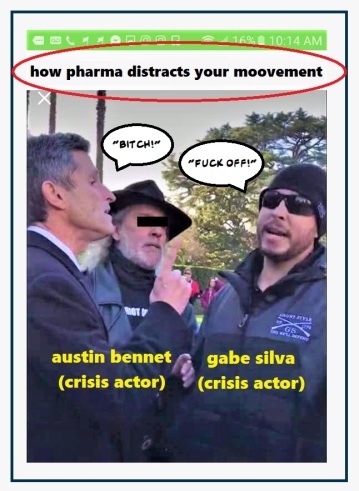 BENNETT and the SB277 REFERENDUM MONEY
Regarding the failed SB277 Referendum, Bennett boldly claims that “money was stolen” and “signatures disappeared.”  (Actual quotes!)  But, wait a sec — how the fuck does Bennett know that “money was stolen” or that “signatures disappeared?”  What is the source of Bennett’s knowledge?  And if Bennett knows that money was stolen, when is he going to file a crime report with 5-0?  Srsly!  Bennett is NOT a Good Samaritan!  Just wondering:  don’t elected officials have a duty to report crime when they see it?  Bennett is basically telling voters: “Vote for me because I always look the other way when crimes are committed in the elections process!”  (IKR?!) 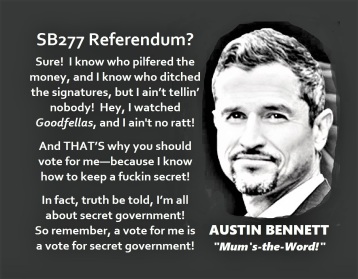 MUM’S-the-WORD!
What is Bennett hiding?  Who is he protecting?  Ask Bennett about the stolen money and signatures — he dummies-up.  Bennett refuses to “out” the crooks who betrayed the SB277 Referendum — for fear that he (Bennett) will be sued for defamation!!  C’mon!  So long as Bennett tells the truth, he cannot be sued for defamation!  (Trust me, I’m a lawyer.)  All he’s gotta do is tell the truth, the whole truth, and nothin but — but that will never happen — not so much because Bennett is a dirty SOB, but because he’s a smarmy, crooked-ass, politician in a cheap-ass suit ‘n tie.  #Bennet4TrashCollector 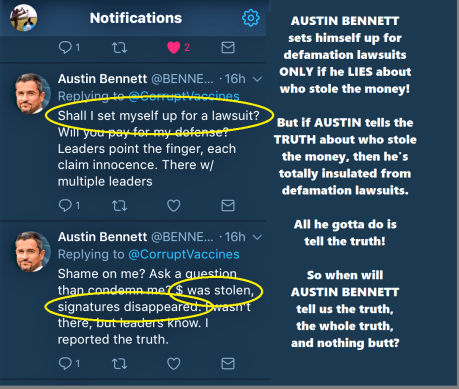 WHEN BENNETT LOSES
When Bennett loses the Senate race, we are going to laugh our asses off!  We’re gonna post GIFs with “middle finger salutes” while dancing in the end zone — and we’ll dance our asses off like Eddie Murphy:  “You dropped your ice cream, you dropped your ice cream!” But, truth be told, our celebration dance will be somewhat hollow — because Bennett’s gonna lose … on purpose!  Yep!  Trust me on this one — not so much because I’m a lawyer, but because I’m a mystical seer too.  #nostradmusAF

PHARMA CONTROLS BOTH PARTIES
For those who are awake, it comes as no surprise that pharma typically controls both political opponents — (D) and (R) — who pretend to be rivals.  (“Wink-wink!”)  C’mon!  Why do you think we have a two-party system? (LoL!)  Because collusion is easiest with the fewest parties involved … two!  Secrets are easiest to keep between two parties, hence, our two-party political system!  #TheMoreYouKnow

PHARMA CONTROLS BOTH CANDIDATES
Pharma controls both sides of the Facebook vaccine debate!  Half of Facebook is decidedly “pro-vaccine,” while the other half, curiously enough, is not “anti-vaccine,” but instead — owing to pharma’s influence — they call themselves “pro-health” and “pro-freedom,” “pro-choice,” etc. — to avoid offending anyone with the “V”-word (vaccine).  Likewise, pharma controls both candidates in the 6th District Senate race!  Pharma controls Pan (obviously) and pharma also controls Bennett (not so obviously).    #truestory 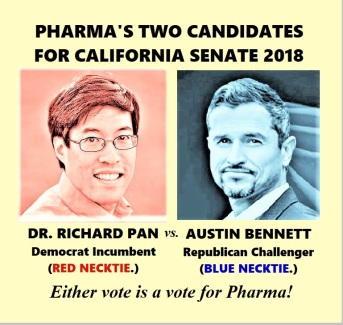 BENNETT FINANCIAL STRATEGIES
Bennett supposedly has a business called “BENNETT FINCNCIAL STRATEGIES.”  But according to the California Secretary of State, there is NO such business!  We checked.  In fact, in California, there has never been a corporation, LLC, or partnership called: “BENNETT FINANCIAL STRATEGIES.”  (“Surprise!”)  Bennett’s handlers figured nobody would ever visit the California Secretary of State website to checkup-on Bennett’s fake-ass business!  But Bennett’s handlers never counted on the Truth Hits Investigative Team!   #playersstayUP

DUDE, WHERE’S YOUR PROPOSED BILL?
Bennett claims he’s going to repeal SB277.  But first, he must propose a bill.  However, after all these months, Bennett still has no bill to repeal SB277!  Why no bill?–apparently, Bennett is incapable of writing a bill himself and he’s too broke-ass to hire a lawyer to write one!  (Loser!)  Dude, where’s your proposed bill to halt SB277?  The dog ate it?  The Russians hacked it?  Schmack’d it?  #crickets 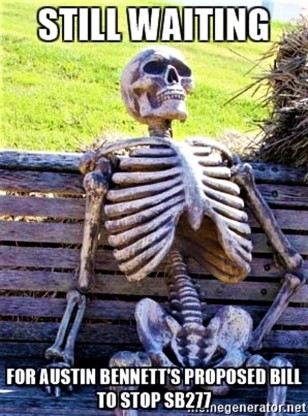 WHAT WOULD TMP DO?
If TMP were running for Senate, TMP would actually write a bill to repeal SB277!  (Yay!)  And then TMP would tell voters:  “Elect TMP, and the day after election, TMP will march onto the Senate floor — bill in hand — to sweep away mandatory vaccination!”  #hallelujah

WHEN TMP BECOMES GOVERNOR
The Truth Hits Investigative Team has confirmed rumors that TMP will soon announce his California gubernatorial run in 2022!  Our Truth Hits I-Team met with TMP on the campaign trail at Hakkasan, in Las Vegas, to ask about his unique platform, which has but one agenda item.  TMP explains:

“When I become Governor, I shall immediately sign an executive order making it unlawful to print the words Democrat, Republican, or any political party, on any ballot in California!  And once we remove (D) and (R) from the ballots, folks will be forced to think for themselves — and vote issues, not politics — and Californians may then revisit their traditional Spanish roots — as free-thinkers!” #vivacalifornia!

THE SOBERING REALITY of MATH
It is mathematically impossible for Bennett to win!  FAST FACT: In Bennett’s voting district, Democrats vastly outnumber Republicans — by a wide, wide margin!  And rest assured — brain-dead zombies cast their votes based only on established (D) and (R) stimulus-response!  For chrissakes!  If they didn’t have (D) and (R) on the ballots, then zombies wouldn’t even know who to vote for in the first place!!

THE YODA EFFECT
Many celebs, including YODA, support TMP’s agenda to abolish (D) and (R) from the ballots!  Our Truth Hits I-Team met with YODA at the Hollywood Roosevelt Hotel in L.A., where  Yoda softly explained:  “Abandon the left-right paradigm, we must!” 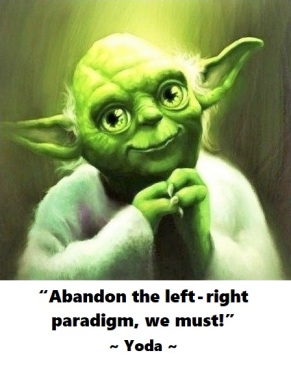 IF BENNETT WANTED to WIN
If Bennett really wanted to win, then he would follow YODA’s humble advice and abandon the left-right paradigm!  Are you awake?  Hello?!  If Bennett were to run as a Democrat, then he could oppose Pan in a meaningful way, i.e., the voters would be forced to cast their votes based on candidates and issues, and not solely on the mindless act of selecting either (D) or (R)!

SO WHY DOESN’T BENNETT RUN as a DEMOCRAT?
Because he’s not supposed to win!!  That’s why!  Remember, Bennett’s loss will ensure Sen. Pan’s re-election.  (Well-played, pharma!)

‘LOYALTY NOT to ANY POLITICAL PARTY’
Does party affiliation matter?  Some folks think it reprehensible to be a Democrat.  But why?  Is it any less reprehensible to be a Republican?  Besides, in his own words, Bennett says that his “loyalty is to the truth in the interest of the We the People, not to any political party.” (Actual quote!)  In his own words, Bennett has no party loyalties — so why not run as a Democrat?  (“Shh!” Stop asking!) 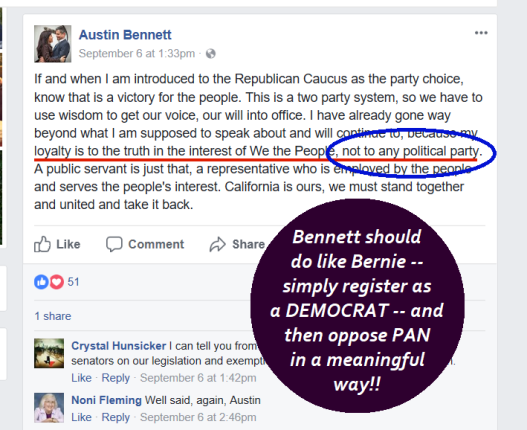 WHY NOT RUN as a DEMOCRAT?
If Bennett ran as a Democrat, he could then oppose Pan in the June primary elections!  But this won’t happen because that’s not how pharma scripted it!  Bennett’s role is to be a hand-puppet, with pharma’s guiding hand elbow-deep up his ass!  Bennett is obviously a hollow “straw man” because, in real life, he’s totally clueless about vaccine issues!

BENNETT is SCIENTIFICALLY ILLITERATE
When it comes to immunology, Bennett is as dumb as a throw pillow!  Bennett writes:  “Our babies do not build antibodies until they are two years old.” (Fuckin poser!)  Srsly?  Babies don’t build antibodies until age two?  Obviously, babies do!  But how would Bennett know about babies?  He’s only got like 9 fuckin kids!  Then along comes Andrew Lebitch — who ain’t got NO kids, (and never will because he’s #fuckugly), but even Lebitch knows the obvious, i.e., babies do indeed produce antibodies!  Much to our delight, Lebitch loudly calls bullshit on Bennett — then bitch-slaps Bennett for his moronic statement!  #priceless

IT’S ALWAYS the LEADERS
Remember, Bennett is running for office — to become a “leader.”  Pharma knows that the best way to CONTROL an opposition moovement is to LEAD it themselves!  So, naturally, pharma “controls” the “leaders” of your moovement — Del, Andy, Polly, etc., and Austin — this is the “controlled opposition!”  They kinda, sorta oppose pharma, but in the end, they sell the “false promise of safe vaccines,” which plainly demonstrates pharma’s controlling influence. 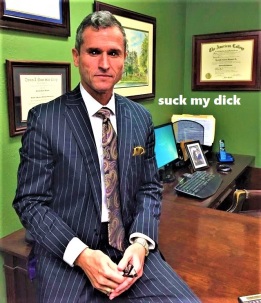 STAND and FIGHT!
Don’t rely on Sacramento lawmakers to fix the SB277 problem — the lawmakers screwed you in the first place!!  Instead, stand and fight!  Go to court and fight for medical custody of your children!  Drumroll … “Ta-da!”  The Truth Hits I-Team presents a “fill-in-the-blanks” lawsuit to halt SB277 — written by none other than legendary California attorney, T. Matthew Phillips!!  Let’s open the floodgates of litigation!!  This lawsuit is designed as a template — you can represent yourself, or better still, go hire a lawyer!  The lawsuit is already written — but feel free to edit or amend as you see fit!  Just click on the link below!  Share widely!! #openthefloodgates

“Freedom means nothing if you can’t keep the government out of your body.” ~~TMP.