“The Case Against California SB-276!”
by T. Matthew Phillips, Attorney-at-Law

Cambridge Smallpox Epidemic (1902)
During the Cambridge smallpox epidemic of 1902, the State of Massachusetts enforced mandatory vaccination for all city inhabitants – children and adults.  But it’s worth noting that Massachusetts also recognized the fundamental right to “medical exemptions” for children who presented signed doctor’s notes.

Jacobson vs. Mass. (1905)
In the landmark decision, Jacobson vs. Mass., [197 U.S. 11 (1905)], the Supreme Court left undisturbed the notion that “medical exemptions” should be available for children who presented signed doctor’s notes.

Senate Bill No. 276 (2019)
In California today, in the wake of SB-276, signed doctor’s notes don’t count.  Private doctors are no longer allowed to write “medical exemptions” for schoolchildren wishing to escape the horrors of vaccination.

Death Panels
Since SB-276 became law, (Sept. 9, 2019), the State alone decides “who” shall have medical exemptions.  The Calif. Dept. of Public Health is basically a death panel that decides which children shall live or die.  Make no mistake; mandatory vaccination guarantees that a certain percentage of schoolchildren will be sacrificed on the deathly altar of inoculation — all for the greater good.  And as to each child foully murdered, there is no liability for the State nor the vaccine makers.

The Signpost Up Ahead
Medical decisions should be made by doctors and patients — free from unwarranted state interference.  But SB-276 cuts doctors out of the loop.  Under SB-276, the State alone shall decide whether your child is fit for vaccination.  But remember, where gov’t agencies claim that they possess certain “rights” – the same “rights” that they deny to citizens – there is the unmistakable signpost of tyranny!

Totalitarian Control
Under SB-276, all medical exemptions must be approved by the State.  Private doctors may no longer render opinions on vaccine safety, which is frightening when you realize the implications.  The State now has totalitarian control over which children, if any, get to be exempted from participating in the vaccine holocaust. 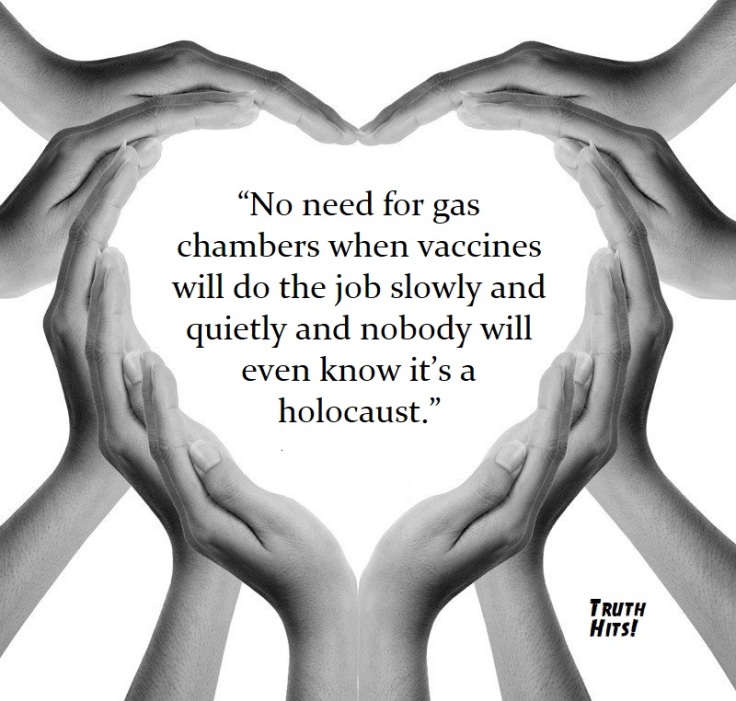 The Reason for SB-276
They told us that SB-276 would stop unethical doctors — who were getting paid to concoct lame excuses for “medical exemptions.”  And, because of these supposedly illegitimate exemptions, “un-vaccinated” children were suddenly able to worm their way into the classroom — and expose the “vaccinated” children to risk of infection.  But this is ridiculous!  First of all, the “un-vaccinated” cannot spread diseases they don’t have, and second of all, the “vaccinated” apparently have no confidence that their vaccines will work!

Isn’t It Ironic?
SB-276 gives the State the exclusive right to decide whether vaccines are “safe” for your child.  But curiously, Sacramento provides no definition for the term: “safe.”  And this is huge!  It’s also crucial to understanding the safe vaccine hoax!– i.e., they never define the term “safe!”  (Get it?)  They just say, “safe ‘n effective” over and over again — all the while hoping it will stick to your cranium and become a matter of blind faith.

Bruesewitz vs. Wyeth
The gov’t talks a lot about “safe vaccines” — but no such things exist — which must explain why they have no definition for the term: “safe vaccine.”  Back in 2011, the Supreme Court noted this important factoid: “The FDA has never even spelled out in regulations the criteria it uses to decide whether a vaccine is safe and effective for its intended use,” [Bruesewitz vs. Wyeth LLC, (2011) 562 U.S. 223]. 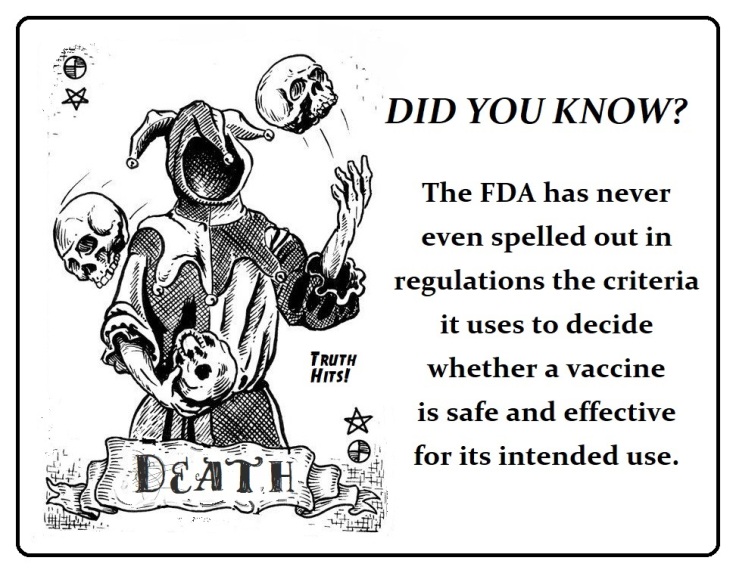 No Such Thing as “Safe” Vaccines
During clinical trials, how many test subjects must die or become disabled before a vaccine is deemed “unsafe?”  And, after a vaccine is on the market, what is the highest number of consumers that a given vaccine can kill or disable—and still keep the coveted “safe” rating?  (Nobody knows…)

Governmental Overreach
With SB-276, Sacramento goes way too far!  SB-276 is unconstitutional.  It violates the 14th Amendment requirement that all state laws operate within traditional bounds of fair play and substantial justice.

Fascism!
When it comes to your children, no state may insist upon substituting its medical wisdom for the wisdom of licensed professionals or informed parents.  SB-276 is an eye-opening, real-world example of in-your-face “socialized” medicine!  SB-276 empowers the State with totalitarian control, and with it, comes the cold, wet smell of fascism.

When Science Becomes Religion
The Powers That Be, (“PTB”), arrogantly presume to impose their belief system on “we mere mortals,” and they further presume that we will dutifully accept their beliefs, without question, as if they just brought the stone tablets straight off the GD mountaintop! 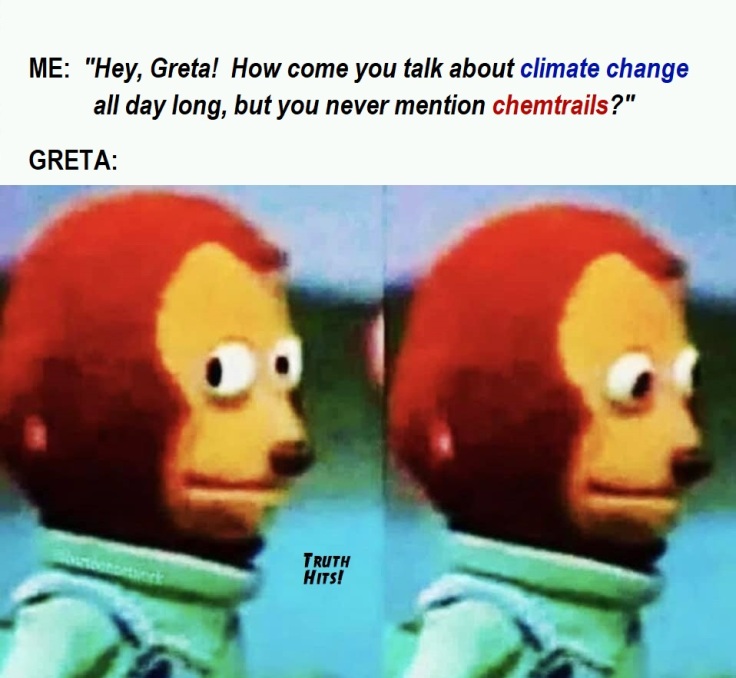 Marcia!  Marcia!  Marcia!
We free-thinkers view medical research with mistrust; and we are not alone—“It is simply no longer possible to believe much of the clinical research that is published, or to rely on the judgment of trusted physicians or authoritative medical guidelines.  I take no pleasure in this conclusion, which I reached slowly and reluctantly over my two decades as an editor of The New England Journal of Medicine.”  – Dr. Marcia Angell, (first woman Editor-in-Chief, NEJM).

The Last Resort
Wow!  If the State had any worthwhile arguments in support of vaccines, then Facebook, Twitter, and YouTube wouldn’t have to resort to censorship in the first place.

Separation of Pharma and State
Sacramento has no business making medical decisions for your kids.  Separation of “pharma and state” must become the law of the land.  Freedom of religion means nothing if parents can’t keep the government out of their children’s bodies.

Can’t Fool Mother Nature
We half-mad, misguided people dream of a time to come, when it shall be lawful, to retain intact, the pure body Mother Nature gave.  Know your rights!  ~~TMP.

(1) his billionaire friends assassinated him,

or, in the alternative,

(2) his billionaire friends rescued him.

Suicide is not a possibility.

“Science is as much of a religion
as any religion has ever been.”
Dr. Nancy L. Swanson, PhD

One thought on ““Welcome to the Church of Vaccinology!””